Wintergreen, known for its stimulating aroma and minty flavor, is a low-growing evergreen native to North America. Although the familiar flavor is now produced synthetically, oil of wintergreen was once used in many popular candies, cough drops, chewing gums, and toothpastes. 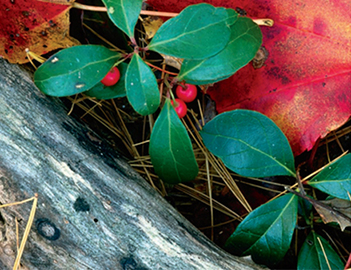 Wintergreen’s edible berries and leaves — which have a delightful, spicy flavor — are a favorite of foragers from fall through early spring. Clark’s Teaberry chewing gum, first produced in the early 1900s, was inspired by the flavor of wintergreen.

Caution: Wintergreen oil can be toxic if consumed even in small amounts. People sensitive to aspirin should not use wintergreen or other products containing methyl salicylate in any form (including topical creams), as this compound is absorbed easily into the bloodstream.

With its glossy, evergreen foliage and bright red berries, wintergreen is an attractive, low-maintenance plant for shaded locations, such as woodland gardens. Although it rarely forms a dense carpet, wintergreen mixes beautifully with other woodland plants, such as blueberry and bunch-berry dogwood (Cornus canadensis).

Wintergreen grows best in partial shade and evenly moist, fertile soil with an acid pH of 5.0 to 6.0. Native to hardwood and pine forests, wintergreen benefits from pine straw mulch, which will help retain moisture and block weeds. Water it regularly during dry periods. Wintergreen leaves can be harvested at any time; gather the berries when they’re red, which signals that they’re ripe.