This low-growing bushy perennial bears dark green, serrated leaves that are intensely sweet. In recent years, stevia has grown in popularity as a healthful sugar substitute; it’s sold in leaf, liquid, and powdered forms. Stevia extracts are said to be 200 to 300 times sweeter than granulated sugar, but with no calories and apparently none of sugar’s negative side effects, such as causing tooth decay.

The plant has been used commercially in various parts of the world for more than 3 decades. It is especially popular in Japan, where it is used to sweeten many products, including soft drinks, chewing gum, and pickles. In Paraguay, where this species grows wild, stevia leaf has been used for centuries to sweeten the herbal beverage maté.

The sweetness in this plant comes from compounds known as steviol glycosides, initially identified in 1931. The first commercial use of these compounds took place in Japan, in 1971, in response to concerns over the possible toxicity of other artificial sweetener products in use at that time. Crystals of stevia extract are produced by drying the plants and processing them in water to collect the steviol glycosides, then treating the extract with alcohol, causing the glycosides to crystallize. 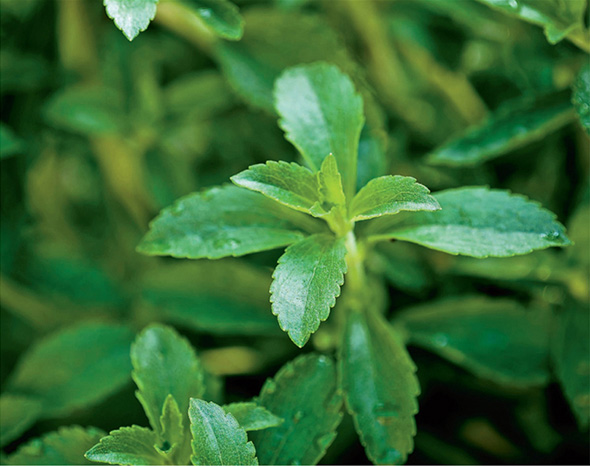 Range/Habitat: Native to subtropical highlands of Paraguay and Brazil

Intensely sweet, stevia can be used as a healthful substitute for sugar and artificial sweeteners. It has a mild, aniselike aftertaste that most people enjoy. Powdered commercial products that contain crystallized leaf extracts are available for use in baking and for sweetening beverages. Because they are, by weight, so much sweeter than cane or beet sugar, use them sparingly; depending on the product, 1 to 4 teaspoons of stevia extract equals the sweetness of 1 cup of sugar. Stevia will not brown or caramelize the way sugar does when heated, so it cannot be substituted in certain desserts.

Although stevia’s principal value is as a noncaloric natural sweetener, it could benefit people with hypertension or type 2 diabetes, as well. The plant contains rebaudioside and stevioside, glycosides responsible for its sweet flavor. A clinical study published in 2003 showed that patients with mild hypertension taking a capsule of stevioside powder over a 2-year period had significantly lower systolic and diastolic blood pressure and no adverse effects. A small-scale human clinical trial also supported stevia’s effectiveness for lowering blood sugar in type 2 diabetics, a traditional use for the plant. Stevia has also been used traditionally as a contraceptive in Paraguay.

Caution: Because of limited data showing that stevia may prevent conception, the herb should not be used by pregnant women or by those trying to conceive.

Grow stevia in full sun and well-drained soil. It will not survive freezing temperatures, but it is easy to grow in a 10- or 12-inch pot filled with a lightweight growing mix. The potted plant can be kept outdoors when temperatures are above 50°F and there is no danger of frost. Stevia is difficult to grow from seed, so start with young, nursery-grown plants (available from several mail-order suppliers). Water lightly but often during the summer; a thin mulch of compost will help keep the plant’s shallow feeder roots from drying out.

During the growing season, feed plants with a slow-release, low-nitrogen organic fertilizer. Harvest the leaves in fall, when shorter days and cooler temperatures have intensified their sweetness. Dry the leaves on a screen in full sun for about 12 hours, then crush them by hand or with a coffee grinder and store them in an airtight container. Stevia can be propagated by root division or cuttings.

In the early 1980s, plant explorer D. D. Soejarto, a student of Professor Richard Evans Schultes, investigated native Stevia populations in Paraguay, Peru, Colombia, and Mexico. During a period of 3 months, he and his team collected more than 30 species in this genus. Each time he collected a plant, he tasted the fresh leaves, noting their taste and degree of sweetness. He also gathered information from people in each area, recording the traditional uses of these species.

In Paraguay, a root decoction of Stevia balansae is used to treat diarrhea; in Peru, the whole plant of S. macbridei is made into a decoction and used for a bath for women; in Mexico, the leaves and stems of S. salicifolia are treated with water and used as a rub for people with joint problems.

Carefully gathering data, Soejarto and his colleagues reported in the Journal of Economic Botany that S. -rebaudiana, the commercial source of stevia sweetener, was the only member of this genus that had sweetening properties. He also warned that the species’ genetic diversity was being diminished by the destruction of native habitats for farming, logging, and other uses.

Tragically, this story is being repeated around the world with many species — wild populations of plants critical to our future are being destroyed for short-sighted and unsustainable resource extraction. Their genetic diversity could someday help plant breeders create varieties more tolerant of warming, drought, floods, and other challenges posed by global change. 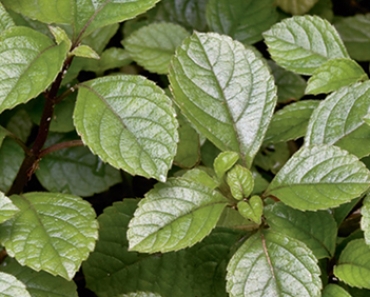