The pomegranate is a 15- to 20-foot-tall evergreen native to central Asia from Iran to the Himalayas. Mentioned in the Bible, Koran, and other ancient books, the tree has been cultivated since ancient times throughout the Mediterranean region of Asia, Africa, and Europe. Its red flowers develop into rounded, scarlet fruits up to 5 inches in diameter.

The name comes from the Medieval Latin words pomum (apple) and granatum (seeded), and indeed the fruits are filled with crunchy seeds, each of which is encased in the sweet or somewhat sour red pulp known botanically as an aril. Believed by some to be the forbidden fruit of the biblical Garden of Eden, the pomegranate has been regarded as a symbol of fertility, prosperity, and even immortality by ancient cultures.

The Ebers Papyrus (ca. 1550 BCE), one of the world’s oldest medical texts, discusses the plant’s healing properties. The rind of the fruit has long been used as a dye. Depending on the preparation method and what the rind is mixed with, it can produce yellow to green tints. 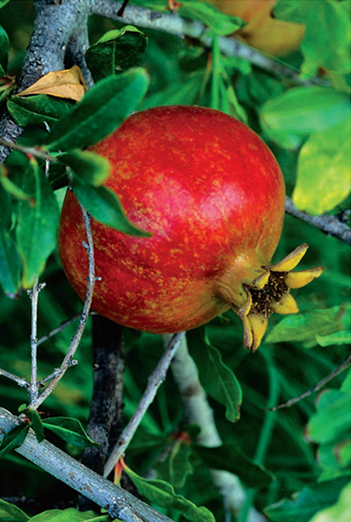 Description: Evergreen tree, 15 to 20 feet tall, with twisted, multiple trunks; red flowers are followed by scarlet fruits up to 5 inches in diameter; seeds are covered with a juicy red pulp

Range/Habitat: Native to central Asia, from Iran to the Himalayas

To remove the seeds from the fruit, cut the fruit in half, then submerse the halves in water. (Be careful; the pulp-covered seeds can stain.) Gently scoop out the seeds with your fingers, letting them sink to the bottom of the bowl, then skim off any pith that floats to the surface. Pour the water through a mesh strainer to separate the seeds. To obtain the juice, wrap the seeds in cheesecloth and squeeze the liquid into a bowl.

The seeds from one pomegranate will yield about 1⁄3 cup of juice, which can be used to flavor sauces, vinaigrettes, marinades, or desserts. The original grenadine syrup, used in cocktails, was made with pomegranate juice.

This fruit is both medicine and food, low in calories and rich in many important nutrients and compounds. Pomegranate juice is gaining popularity as an antiaging, free-radical-fighting antioxidant “superfood” that protects cells from oxidative stress and reduces inflammation. It could also prove helpful for treating or preventing many health conditions, including diseases of the heart and blood vessels. In Ayurvedic medicine, pomegranate’s astringent root bark has been used to expel worms, especially tapeworms, from the body. Its astringent fruit rind is very rich in tannins and highly effective for treating diarrhea. To treat infants with that condition, the rind is powdered and mixed with buttermilk. In some studies, pomegranate rind has also inhibited the herpes simplex virus. 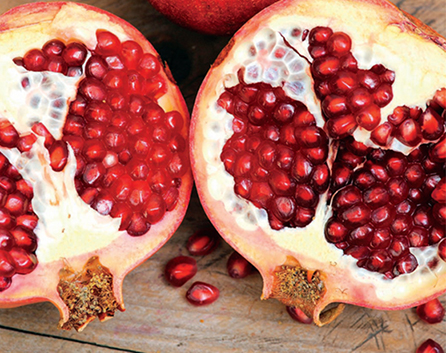 Pomegranate thrives in subtropical climates with slightly alkaline, loamy soil, such as in the southwestern region of the United States. Provide full sun and well-drained soil. Feed in late winter and spring with a slow-release, balanced organic fertilizer. Pomegranate is self-fruitful, but potted indoor plants require hand pollination to set fruit. Or, for insect pollination, move the pots outdoors when the weather warms up in spring; bring them indoors when temperatures drop below 40°F in fall. Pomegranate can be propagated by hardwood cuttings taken in late winter, or by layering.

From Ancient Symbol to Modern Superfruit

The Old City of Jerusalem is honeycombed with narrow alleys that twist and turn, eventually opening into larger open spaces. Wandering through this area is like visiting an earlier culinary, cultural, and spiritual time. Here and there, vendors stand behind tables with small steel presses and large pyramids of pomegranates. They shout out a friendly invitation to sample the fruits’ refreshing red juice.

According to archeological evidence, the pomegranate tree has been cultivated for at least 5,000 years. Native to the Middle East — most likely Persia — it is believed by some to be the biblical “tree of knowledge.” Since ancient times, the fruit was considered a symbol of fertility because of its many seeds. The cultivation of this fascinating plant eventually spread to India, northern Africa, Asia, Europe, and the New World.

As modern research began to uncover the fruit’s many health benefits, pomegranate has gained popularity. Known to relatively few Americans just a decade ago, the pomegranate is now considered a “superfood,” widely consumed as a fresh fruit, juice, and in an array of commercially packaged products and supplements. 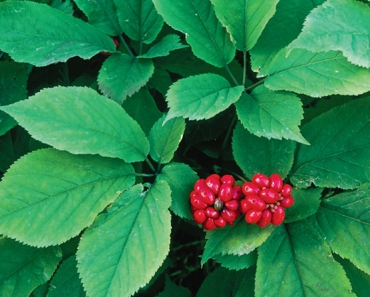 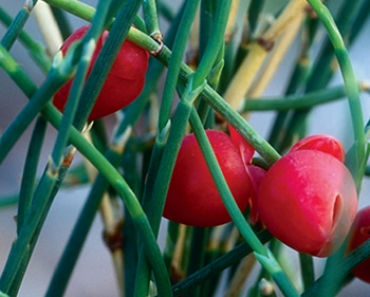