This evergreen perennial vine grows naturally in fields and along roadsides from southeastern North America to northern South America. Sometimes called maypop, the plant produces egg-size, sweet, edible fruit that makes a popping sound when mashed. The filaments of the showy blossoms were thought to resemble the crown of thorns worn by Christ during his crucifixion, and the five anthers represented the five wounds he received. Because of this, the Spanish friars who saw the flowers of this genus in South America called it the “flower of passion,” or as it is known today, passionflower. Passiflora incarnata is the most useful medicinal plant in this genus. 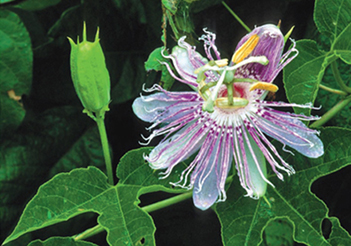 Range/Habitat: Ranges from southeastern North America to northern South America, as well as the Caribbean and Madagascar; edges of wooded areas, thickets, and fence lines

A sweet pulp covers the seeds of the maypop’s ripe fruit. Native Americans boiled the fruits to make syrup and crushed and strained them to make juice. You can prepare the fruit in similar ways, using a sieve or strainer to remove the hard seeds. Also, try the pulp in jellies and frozen desserts.

Native Americans made preparations from the roots to treat wounds, ear infections, and liver problems; they also used the plant as a sedative to treat nervous conditions. Other medicinal uses for this herb include the treatment of colic, menstrual pain, dysentery, diarrhea, and muscle spasms.

Today, passionflower is best known for its sedative and tranquilizing properties, and it may be used to treat insomnia, anxiety, and nervousness. A recent clinical trial showed that drinking passionflower tea at night improved patients’ sleep quality, as compared with a placebo. Another human clinical study showed that this herb could manage some of the symptoms of generalized anxiety disorder; after several weeks of comparison against patients using oxazepam — a member of the benzodiazepine class of drugs (which includes Valium) — the group using passionflower extract showed less “job performance impairment” as compared to the group using oxazepam.

Caution: Do not use this plant if you are pregnant.

Passionflower grows easily from seed or cuttings in deep, fertile, well-drained soil and full sun to partial shade. (If you live in Zone 6 or colder, you can grow the vine in a large container; bring it indoors in fall.) For best blooming, enrich the soil with compost, and fertilize two or three times during the growing season. Prune out weak or crowded stems in early spring each year. Passionflower is considered invasive in some areas; control its spread by removing suckers regularly. Harvest the fruit when it turns yellow-brown. 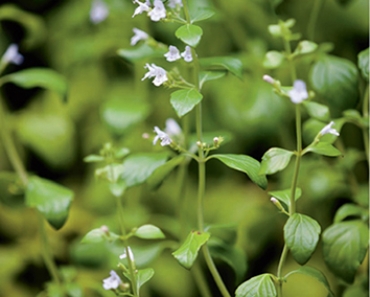