People have grown kava for so many centuries that its original birthplace is unclear, although the highest diversity of cultivars (often an indicator of a plant’s origin) is found in the Pacific Island nation of Vanuatu. Today, kava grows throughout the Pacific Islands from Hawaii (where it is called “awa”) to New Guinea. A member of the pepper family, this tender, sprawling, perennial shrub has stout rhizomes and bears large, heart-shaped leaves and small green spikes containing tiny flowers.

The plant roots are harvested only after the plants have grown for at least 3 years. The remaining long, thin stems are then cut into sections and replanted, to be harvested when mature. Traditionally, people macerate the roots and make them into a beverage consumed for ritual use and social interaction. Kava derives from a Greek word meaning “intoxicating.” 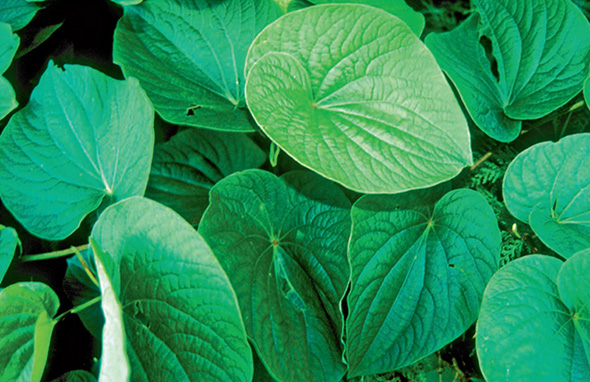 Kava contains kavalactones, compounds that relieve pain and relax muscles. Kava root extracts in the form of tinctures, pills, or capsules are used to treat nervousness, anxiety, stress, and restlessness. Human clinical studies have shown that dosages containing 60 to 120 milligrams of kava-lactones can be very effective for treating anxiety disorder. Some studies have found kava to work as well as benzodiazepines (a class of drugs that includes Valium). One study showed that kava might help prevent the uptake of noradrenaline, a hormone that initiates a stress response.

In traditional use, people chew kava to relieve the pain of a sore throat or toothache; they also apply the leaves to wounds and stings. Kava’s anesthetic properties are about twice those of aspirin. Combined with pumpkin seed oil, kava has been used to treat irritable bladder and irritable bowel syndrome.

To make a kava tea, gently simmer 1 teaspoon of the dried and sliced root in 1 cup of water for 10 minutes. Strain. Drink 1 or 2 cups per day.

Caution: Kava should not be taken by pregnant or nursing women, and its long-term use should be monitored by a health-care professional.

Kava grows in moist, sunny highlands or wet tropical forests at elevations to 1,000 feet above sea level. The plant cannot tolerate temperatures below 55°F, but you can grow it in a container in a warm greenhouse if you mist frequently to maintain a high humidity level. Amend the growing medium with coarse sand or grit to ensure good drainage and aeration. Gradually increase the pot size and replant as needed. Begin harvesting the roots when the plants are 3 years old. After harvesting the roots, propagate new plants from stems that contain two or three nodes.

Traditionally, the roots are pounded, releasing a bioactive liquid, then mixed with other substances and consumed. The bitter root extract is an acquired taste, but the effects are quite pleasant — mild euphoria, amicability, and greatly reduced anxiety. It is also a muscle relaxant, so drinking too much Sakau results in a lack of motor coordination (so moving around is not suggested) while your mind remains crystal clear.

On Pohnpei, people come together regularly to drink Sakau and to discuss the day’s issues, exchange stories, and gossip. The beverage promotes social interaction, perhaps in the same way as that first glass of wine at a dinner party.

In Germany, where physicians are trained to prescribe both pharmaceutical and herbal medications, Sakau (kava) is recommended for the treatment of anxiety, stress, and restlessness. Tinctures and teas of this plant can usually be found in your local health food store under various brand names. Note that the tea should not be made with extremely hot water, as the kavalactones — the bioactive compounds — are thought to degrade with high heat. 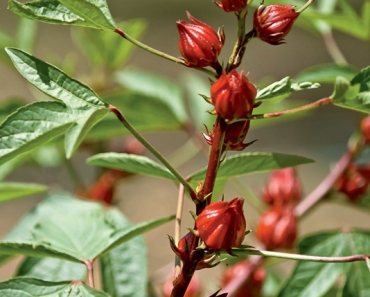