Most, if not all, of the world’s cultures have incorporated herbs and spices into a unique culinary signature. In Japan, for example, a seven-spice powder — which may include sesame seeds, poppy seeds, and dried chiles — is sprinkled over udon noodles and grilled chicken yakitori. In India, garam masala, an intricate blend that varies regionally, adds nuance to grilled meats. In Italy, basil and garlic mingle with olive oil, pine nuts, and Parmesan or pecorino cheese to make a delicious pesto sauce. The Middle East’s signature spice, za’atar, is a blend of ingredients that includes thyme, sumac, sesame, and salt. It is used in cooking and put on hummus, as well as mixed with olive oil and sprinkled on flat bread. In Hungary, mild and piquant varieties of paprika add color and taste to goulash and other foods. On the following page are just a few examples of the ways herbs and spices have influenced food customs around the world.

NORTH AMERICA AND THE CARIBBEAN ISLANDS

The cuisines of North America and the islands of the Caribbean are largely shaped by the tastes of Europeans, who imported the spices of Asia, combining these with local herbs. Each wave of immigration to the New World brought along the unique dishes, herbs, and spices of the immigrants’ native land. As a result, the cuisine of North America and the Caribbean region blends together the flavors of the world. In the United States, the melting pot of flavors includes the spices cinnamon and paprika, as well as the herbs basil, oregano, and parsley. In Cuban cuisine, the salsalike mojo is made with garlic, orange juice, dried oregano, cumin, and cilantro. In the Caribbean islands, the spices nutmeg, allspice, and ginger commonly flavor stews, while the sultry spice of jerk seasoning — made with dried chiles, thyme, garlic, pepper, and allspice — infuses grilled meats.

The cuisines of Central and South America were greatly influenced by European explorers of the 16th century. In Mexico, Chile, and Argentina, herbs and spices introduced by Spanish conquistadors were integrated with native dishes based on corn, beans, chiles, and cassava. Mexico’s magical mole sauces commonly include chiles, cinnamon, chocolate, nuts and seeds. Recado spice pastes — used as rubs for pork, chicken, and fish — are made with annatto, peppercorns, cloves, cumin, oregano, and cinnamon. In Chile, pebre sauce, used to flavor casseroles, combines garlic, chiles, and cilantro. In Argentina, chimichurri sauce, made with oregano, parsley, garlic, and paprika, adds a flavorful edge to soups, vegetables, and grilled meats. Portuguese colonists and African slaves contributed much to the cuisine of Brazil. The Portuguese influence is evident in the use of herbs such as garlic and parsley along with ingredients such as dried and salted cod, olives, wine, garlic, and onions; the African influence is evident in the extensive use of coconut, plantain, and palm oil. 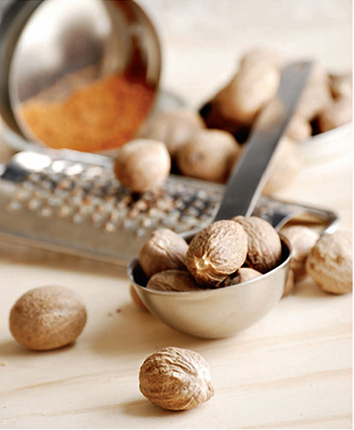 In the cool climates of Northern and Eastern Europe, cooks have traditionally favored the use of strongly flavored spices and warming herbs. Nutmeg, mustard seed, and cloves are frequently added to hearty soups and casseroles, stews, meat pies, dumplings, and pickled and cured fish. In warmer months, fresh herbs such as dill, stinging nettle, and tarragon help lighten the flavor of heavy fare. In Scandinavia, fresh dill and juniper berries are key additions to pickled herring. In Ukraine, the classic relish hrin combines grated horseradish, red beets, vinegar, and sugar. In Germany, caraway is used in sauerkraut, breads, and cheeses, and in Poland, bay leaf is used to flavor bigos, a traditional hunter’s stew.

Mediterranean cooking is best known for its use of fresh herbs, such as sage and tarragon. The cuisines of southern Italy and France draw heavily upon fresh basil, oregano, and rosemary, while Portuguese dishes feature the use of garlic, coriander, and parsley. In Greece, dried oregano and thyme find their way into dishes ranging from fish and stuffed vegetables to the layered moussaka, while in Spain, saffron elevates paella from a humble rice and seafood dish to a culinary tour de force. Herbes de Provence, a common Mediterranean blend often used to flavor roasted meats, features basil, fennel seed, marjoram, thyme, rosemary, and savory.

Middle Eastern, northern African, and eastern African cuisine tends to draw upon spices that passed through the region while being transported to Europe and the West from the Far East. Iranian dishes often call for the addition of luxurious aromatics, such as rose and saffron. Cinnamon is a key ingredient in Moroccan harina, a lentil and tomato soup. Ethiopia’s currylike stews echo the flavors of the Middle East and India and often feature a spice mix called berbere, which includes cloves, dried chiles, and fenugreek.

The cuisines of China, Japan, and Korea have three spices in common — garlic, ginger, and sesame seed — yet each remains distinctive. Korean cuisine, the spiciest of the three, is characterized by the use of chiles, garlic, and ginger, such as in kimchi, a pickled cabbage condiment. China’s cuisine varies in flavor by region, from the intense pungency of Sichuan preparations (which typically use dried chiles and garlic) to the subtle flavors of the lower Yangtze Plain (which incorporate ginger). The cooking of Japan is the most austere, with sesame seed, ginger, or wasabi root used to add dimension and decoration to pristine presentations of singular items such as raw fish or grilled beef.

This region is home to many of the world’s most beloved spices, such as peppercorn, star anise, garlic, and ginger. Blends such as curry powder, which combine many of these spices, are an integral part of the region’s cuisine. Recipes for curry powder vary widely, not only by locale, but also from family to family. In northern India, two spice blends are quite common: garam masala and chaat masala, which include cumin, fennel seed, and cardamom. In southern India, another common blend consists of as many as 20 ingredients, including coconut and tamarind. Indonesian cuisine draws heavily from galangal and lemongrass. The foods of Malaysia are often flavored by sambal bajak, a condiment comprised of chiles, tamarind, galangal, garlic, and kaffir lime leaves. Vietnamese pho, a traditional noodle dish, is flavored with cilantro, Thai basil, lemon or lime, and chiles. In Thailand, the most important flavoring agents include cilantro, basil, garlic, and ginger. 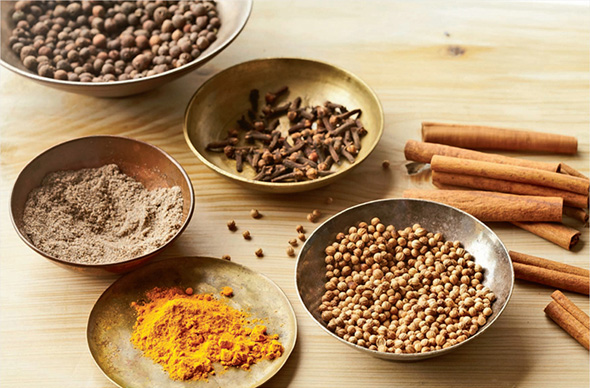 Richly flavored spices, such as (clockwise from top right) cinnamon, coriander, turmeric, cardamom, black pepper, and cloves, are at the heart of many Asian cuisines.

AUSTRALIA AND THE SOUTH PACIFIC

In Australia and New Zealand, influences from British colonists and Southeast Asian immigrants combine with Mediterranean flavors. Ingredients traditionally used by native Aborigines, including Tasmanian pepper leaf, hibiscus flowers, and purs-lane, are also beginning to find their way onto restaurant menus. In the South Pacific, the cuisine of the islands of French Polynesia has been influenced by the flavors of Asia and North and South America, as well as by colonial Europe. Popular dishes range from French-inspired foie gras with vanilla bean to ginger-laden chow mein to fish salad with cilantro. 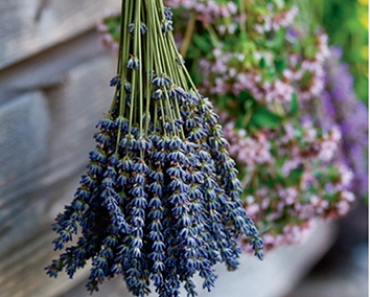 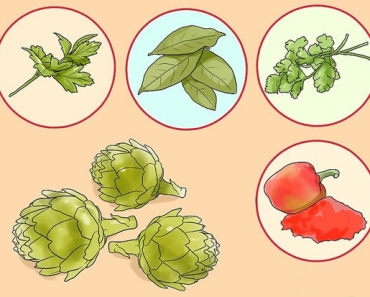 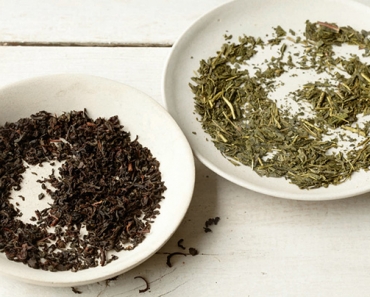