The genus Theobroma, which translates to “food of the gods,” includes T. cacao — the source of our beloved chocolate. Native to lowland tropical forests in Central and South America, cacao is a small evergreen tree that bears long, thin leaves and small yellow flowers formed directly on the plant’s stems. The flowers develop into small, football-shape seedpods that contain the valuable beans. Cacao has been cultivated in Africa since the 19th century, and today, much of the world’s cocoa bean supply comes from that region.

In Central and South America, cocoa beans formed the basis of the traditional Aztec drink chocolatl (also known as xocoatl, meaning “bitter water”), which was enjoyed by the ancient Inca, Maya, and Aztec peoples. Because the drink was made of pounded cocoa beans and spices, without sweeteners, it had an extremely bitter taste. Most people could afford the expensive drink only on special occasions, but members of royalty consumed this beverage frequently as a sign of their elevated position.

The ancient Aztec king Montezuma believed the plant had powerful aphrodisiac effects. According to the Spanish conquistador Hernando Cortés, Montezuma consumed large quantities of chocolatl daily — drinking it from golden goblets — and freely shared it with Cortés. Cortés sent cocoa beans to the king of Spain, where it became popular in Europe in the mid-17th century.

Today, the tree’s seeds are dried and roasted to produce cocoa powder, cocoa butter, chocolate, and a skin-softening ingredient used in cosmetics. 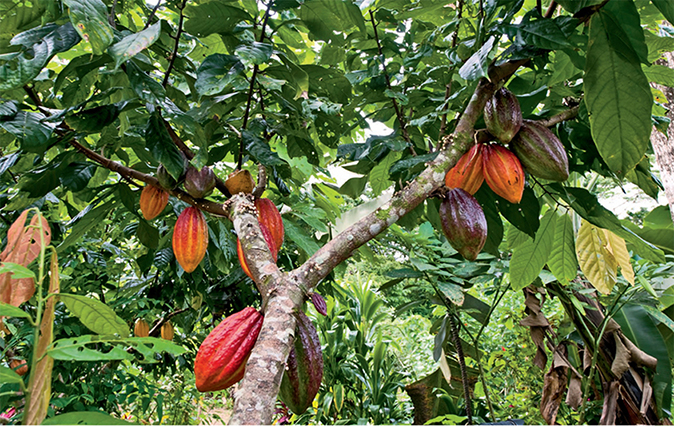 Cocoa is best known as the base ingredient of chocolate. There are several types of chocolate: dark chocolate, which has the lowest sugar content; milk chocolate, which contains dried or condensed milk; and white chocolate, which is made from cocoa butter with added milk and sugar — but no cocoa solids. Chocolate can be used in candy, baked goods, and beverages, as well as in savory meat dishes and sauces, including Mexican mole sauce. It is also used to flavor liqueurs.

Chocolate is a rich source of the antioxidant compounds flavonoids and catechins. Studies show that chocolate may have an effect similar to that of red wine; daily consumption of dark chocolate — the variety highest in flavonoids and lowest in sugar — may help prevent cardiac problems, including reducing the risk of stroke.

While chocolate does contain saturated fat, it does not raise cholesterol levels when enjoyed in moderation. Because chocolate contains a small amount of caffeine, it provides a mildly stimulating effect without the jitteriness that coffee can cause.

Cacao trees grow in fertile, moist, well-drained soil in shade. The trees require a minimum temperature of 61°F and high humidity, and they must be sheltered from the wind. In temperate North America, the cacao tree can be grown in a large pot in a warm greenhouse, exposed to bright but indirect light. After 2 or 3 years, flowers may form, and a few of these may in turn form seedpods. The pods contain edible white pulp and 20 to 60 seeds, which can be used to make cocoa. Commercial growers dry the seeds in the sun for 2 to 8 days, then roast and process them for use as cocoa. Plants are propagated by seed.

The Maya people of Mexico and Central America make a chocolate beverage that is quite different from the sugary hot chocolate we know and love. They toast fresh cocoa beans on an open griddle and then pound them into a powder that they put in boiling water over a cooking fire. A piece of fresh vanilla pod, bursting with seeds, is tossed into the pot along with some very spicy chile pepper. As the water continues to boil, other ingredients — such as black pepper, cornmeal, and sometimes plantains — are added.

This fragrant brew tastes piquant, with no sugar or sweetness added to help the drink go down. After awakening in a hammock in the moist, cool forest, sipping this beverage is a most pleasant way to start the day. Its ingredients have helped indigenous people, such as Panama’s Kuna Indians (who drink several cups daily), avoid hypertension and other conditions associated with aging. Interestingly, those Kuna who have migrated to the capital city and have begun to drink processed cocoa drinks have high rates of hypertension.

Try purchasing ground cocoa seeds, add a few spices (such as vanilla and chile pepper) to the boiling water, and see if this brew can become your new morning drink — it’s certainly much healthier than what we call “hot chocolate.”