A relative of mint, catnip is a unique herb — it’s stimulating and intoxicating to cats but relaxing to humans. Early Greeks and Romans cultivated the plant not only for cats, but also for their own use as a culinary and healing plant. It was mentioned in Apicius, a collection of recipes used in ancient Rome.

In medieval times, catnip leaves and young branches were used in salads and as a seasoning. A Middle English herbal recommended catnip tea for “evils that a man has about his throat.” The herb came to America with the colonists, and in 1796 it was listed as a commercial crop. Early American writers Washington Irving, Nathaniel Hawthorne, and Harriet Beecher Stowe all mentioned catnip in their writings. 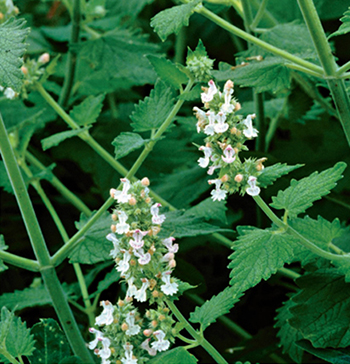 In the past, catnip was a popular kitchen herb, valued for its mintlike flavor and ability to aid digestion. Try adding a small amount of minced leaves to salads, sauces, and stews. It also makes a pleasant tea.

This gentle herb has been used medicinally for at least 2,000 years. It contains nepetalactone isomers, components similar to the sedative compounds found in valerian. Like valerian, catnip has traditionally been used as a mild tranquilizer and sedative. When taken after a meal, catnip tea can help relieve indigestion and heartburn. Because this herb stimulates perspiration, it’s also used to treat fevers. The Chinese use the related herb jing jie (Nepeta tenuifolia) to treat skin infections, colds, sore throats, and fevers.

Caution: Catnip should not be ingested during pregnancy because its volatile oils could irritate the uterus. Drink the tea in moderation; large amounts can cause nausea.

Long blooming, deer resistant, and tolerant of dry conditions, catnip is an excellent choice for your ornamental garden. As a bonus, the brightly colored flowers draw butterflies and hummingbirds.

Catnip flourishes in well-drained soil in full sun or partial shade. The herb is drought tolerant, but it grows best with consistent watering. Harvest the leaves as needed throughout the season. To encourage a second flush of bloom, cut back the faded flower stems in midsummer. (Dry the leaves from the cut stems for later use in teas.) Propagate catnip from seed or by root division; established plants self-seed freely.