This tall, robust member of the parsley family was once believed to possess extraordinary powers of healing and protection. The name comes from the Latin herba angelica, or “angelic herb,” due to its reputation as a magical plant that could ward off witchcraft and illness, including the black death. European peasants placed necklaces of angelica leaves around the necks of their children to protect them, and early European and North American hunters used the herb’s aromatic roots to attract wild game and fish. 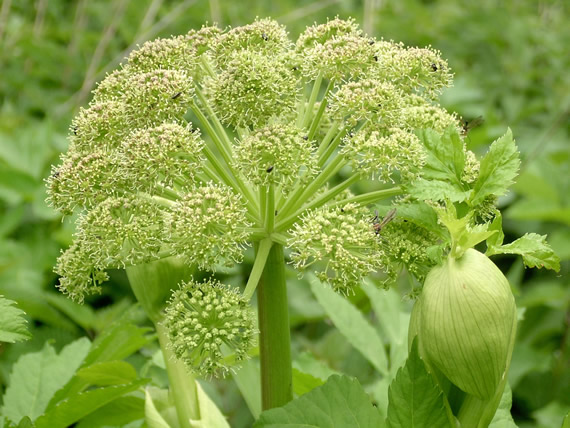 Flowering: Late spring or early summer of the second year 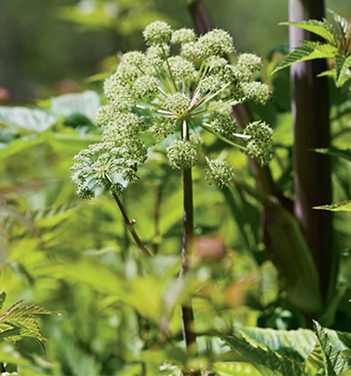 Angelica roots and fruit (commonly called “seeds”) are used to flavor vermouth, gin, Benedictine, and Chartreuse. The stems and leaves—which taste like a blend of vanilla and juniper—pair well with almonds, ginger, oranges, and rhubarb. The young stems can be steamed as a vegetable or candied and added to fruit desserts, ice cream, or mousse. (At one time, candied angelica was used as the green candies in fruitcake.)

One of the most popular herbs in Europe during the 15th century, angelica contains digestion-enhancing volatile oils that support its historical use as a remedy for indigestion. The roots and fruit are used to treat appetite loss, flatulence, and abdominal discomfort. The herb is sometimes used to treat colds, bronchitis, and asthma.

Caution: Angelica can cause a skin rash in some people who are exposed to sunlight after ingesting the herb. This herb should not be taken by women who are pregnant, nursing, or trying to conceive, nor should it be consumed by children younger than 2 years old. Some herb–drug interactions are possible; for example, angelica root interferes with warfarin. Angelica roots should be thoroughly dried before use; they are poisonous when fresh.

Angelica prefers mild summers and struggles in very hot climates. Give this large plant plenty of room and rich, moist, well-drained soil in sun or partial shade. Plant in either spring or fall, but don’t cover the seeds—they need light to germinate. Harvest tender young stems in late summer the first season or in spring the second season, before the plant blooms. Cut stems at ground level. A biennial, angelica self-seeds readily in its second year. 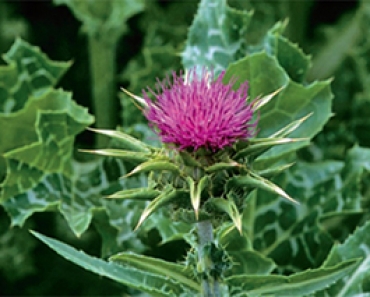